3 basic types of shotgun, Over and Under, Side by Side and Semi-Automatic.

Game shots traditionally use side by side shotguns. The two barrels are next to each other. 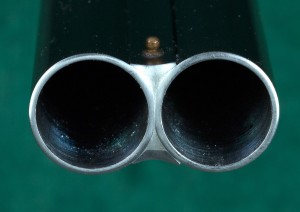 Under and overs have their two barrels vertically one above the other. Clay pigeon shooting favours over and under shotguns. 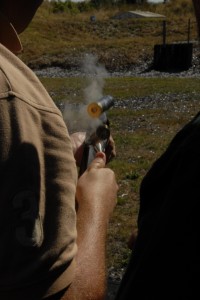 12 bores offer the best combination of performance and weight for most adult shooters.

20 bore shotgun are smaller and lighter making them ideal for use by youngsters, ladies and any shooter looking for less recoil when they shoot.

It is advisable to carry your gun in a protective gun slip. It is also good etiquette.

Carrying your cartridges requires a suitable bag, depending on the specific type of shooting you are doing.

Protection For Your Eyes

Flying shards of broken clay are sharp and dangerous. Protecting your eyes from debris is just good sense and mandatory at clay pigeon shooting venues in the UK.

Shotguns make a noise, and while it isn’t loud enough to instantly damage your hearing, over time the repetitive bang can lead to damage to ears. Clay shooting grounds will insist that any shooters wear ear protection, which come in different types, foam disposable plugs, molded plugs, electronic inner ear plugs as well as ear muffs and ear defenders with electronic sensors to muffle noise and provide protection.

All shooters have their favourite cartridges that they choose to shoot with, and there are many different manufacturers to choose from. Most shooters stick with a cartridge that they have shot well with!

There are two different variations of cartridge available; lead shot velocity and size. The faster the cartridge, the more expensive it will be. Lead shot for clays tends to vary from 6 ½ to 9 in size. 6 ½ has a large lead shot diameter, but less pellets per shot. These larger sized shot will go further so are perfect for long distance targets. In a size 9 shell, the lead is much smaller, but there are more per cartridge. They don’t have the weight to go as far, but offer a bigger pattern of more pellets at closer range.

Many shooters opt for different speeds of cartridge. Faster velocity cartridges will need less lead in front of your target. Speeds vary from 1350 – 1650 feet per second.

Olympic grade clay shooting is skeet based. Skeet shooting consists of a high and low trap that face one another. All skeet grounds provide clay targets that fly within a similar path so wherever you shoot, the targets are going to be very similar.

There are 25 targets in a round, which are shot in sequence from each of the seven shooting positions. The best skeet shooters will frequently achieve one hundred straight without missing a clay.

Sporting Clays emulate game shooting which is why the targets are so different. Different types of targets require different shooting techniques so it can sometimes be a challenge to correctly read what the target is doing so you can hit it.

‘Standard’ targets have a 110mm diameter and are dome shaped.

A Midi is a smaller standard, 90mm in dia.

A Battue is a flat target with a lipped rim. They often turn in mid-air and dive to earth when you least expect it!

Rabbit – 110mm Diameter – is stronger than a standard clay, designed to bounce along the ground at high speed.

Clay shooting is very similar to catching a ball in that you don’t reach out to where the ball is, but where it is going to be. You do the same thing with your lead pellets, so that in effect, the clay will fly into your pattern of lead shot.

To be a god shot, you just need a couple of basic skills; good hand/eye coordination so you can correctly time your shot, and an understanding to ‘read’ what each clay is doing so you correctly anticipate its flight path.

Your shot flies in an oval cloud. Your goal is to position that cloud in the way of the flying clay pigeon.

The skill of clay pigeon shooting is to accurately understand what the target is doing in the air so that the two intersect.

Many clays are set up to be optical illusions, looking like they are doing one thing, while actually doing something different. This is why many easy looking clays are missed on such a regular basis.

Putting your shot in the correct place requires just two things to be right, the speed of your gun movement and the moment in time when you pull the trigger. There are 2 basic techniques, ’maintain lead’ and ‘swing through’.

A clay needs you to have your barrels the perfect distance in front of it when you pull the trigger. Maintain lead is a measured technique of tracking the clays path, staying ahead of it by the exact distance of lead that you think the target requires.

Swing through is a style that is regularly used by experienced shooters. Rather than measuring the shot, the shooter swings through the clay from behind, pulling the trigger when their gut instinct tells them it’s right to do so.

There are seven basic types of clay targets in sporting shooting, which represent many different types of game.

A rabbit is a strong flat 55mm radius clay designed to roll along the ground at speed. Rabbits can be unpredictable with a bounce when you least expect it.

The positioning of the trap and landing point of the target will show you how much the clay is quartering towards you or away from you. A clay that is quartering will often need less lead than a crossing target.

Driven clays simulate game on a shoot being driven towards you. Driven targets can be difficult because they disappear behind your gun barrels just when you need to be able to see them! Driven clays need a swing through technique because of this.

Incomers head towards you, but unlike driven clays, they drop before they reach you rather then flying over your head.

To hit a going away clay, you need to attack the target quickly before it gets too small to hit.

Looping clays start off rising, before falling, and often quarter towards or away from you. Hitting a looper can be tricky and requires practice. Some prefer to hit them rising, while others prefer to wait for them to begin to drop before shooting.